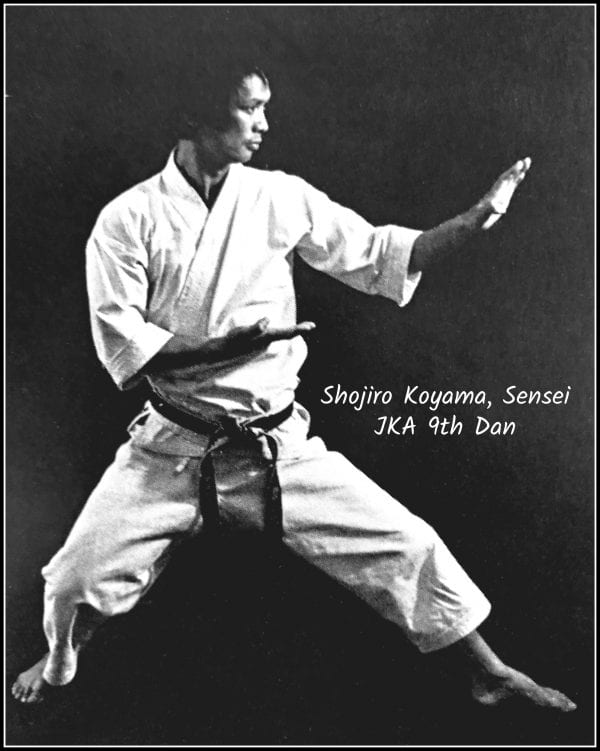 Q: What are the most important points of your teaching philosophy?

A: For me, karate is a mission, one that I brought to the U.S. when I arrived in the early 1960’s. My mission is grounded in 3 major philosophical principles that are underlying virtually everything that I do as a karate instructor. 1) Karate promotes local community service. 2) Karate promotes international goodwill and cultural exchange. 3) Educational karate is a pathway to character development. For example, early on when I arrived in the U.S., I formed the Western States Karate Championship Association. The annual tournament hosted by the WSKCA has always been an excellent vehicle for translating these philosophical pillars into a practical reality.

Also, my karate philosophy reflects my belief that under adverse circumstances and conditions of struggle, a person’s true character surfaces. This is true in general, but also in the microcosm of life that karate represents. For example, when Karateka is unsuccessful in a Dan exam or tournament competition, his or her true nature is revealed quite clearly. Those people who have begun to understand the importance of character development understand that when one is initially unsuccessful, patience and composure are most critical. Failure can be a very good learning experience. Many instructors do not understand this concept and are always quick to compliment and try to soften the blow when their student is unsuccessful. However, I believe that this soft sort of approach will most often not bring out the strength of character as efficiently as when one simply accepts failure, learns from it, and commits oneself to persevering despite it. This mindset forms the core of educational karate, of karate as a lifetime exercise, and is, I believe, what is really meant by the first tenet of the Shotokan dojo-kun; “Seek perfection character.”

Q: What is your opinion of Full Contact karate and kickboxing?

A: Although beautiful in its own right, this type of karate is 100% different from traditional educational karate.  In sports styles such as kickboxing and K-1, victory or defeat is all that matters. Winning is everything and defeat is to be avoided at all costs. In some ways, I think that it is difficult to learn and grow with that type of mindset when one is focused on nothing but winning the next match. A famous professional sports coach once said, “Winning isn’t everything, it’s the only thing” and I think this type of mindset is not compatible with karate as a lifetime activity. Failure is an opportunity for growth. Sometimes, that growth comes many years later, when one has progressed and developed enough to comprehend the lesson in that failure. But it does come when one has the patience to wait for it. Sports karate, wherein “winning is the only thing” is not as conducive to that type of patience or learning.

Q: Do you think that karate in the west is on the same level with Japanese karate?

A: I’m afraid that I can’t answer that question yet. My mission was to bring Master Funakoshi’s art to the US, but that mission is still a work in progress. If one considers only the technical aspects of karate as the basis for comparison, maybe the levels are the same. However, because to me karate is a form of lifetime exercise and education, I cannot judge yet how successful those who have pioneered Shotokan in the West have been. The results can only be judged on the basis of how many people have truly enjoyed life as a result (at least in part) of their training. Because that is the Oriental mindset, it is difficult to compare Japanese “level” versus Western “level”. The basis of comparison is intangible when one looks beyond technical competence.

Q: Do you feel that you still have further to go in your studies in Budo”?

A: I recognize that sports, entertainment, and pleasure are very important, but philosophy and education are my field, my life’s work. Personally, I believe that learning and studying are essential throughout life.

Q: How do you see karate in the rest of the world at the present time?

A: I was watching CNN the other night and saw something that I think was very sad. The reporter was showing a terrorist training camp in which the trainees were practicing karate. To me, this is a tragic misuse of beautiful art which celebrates non-violence and prohibits practitioners from using it offensively. On the other hand, I have also seen karate instructors in universities throughout the world teaching young people that karate is not just a form of fighting, but is a philosophy and form of mental, emotional, spiritual, and physical discipline. That, in a nutshell, is life; sometimes good, sometimes bad. I believe that karate, even if not always used as envisioned by Master Funakoshi, at the end of the day will continue to reflect first and foremost the principles on which it was founded, in spite of its occasional misappropriation.

Q: After all your years of training and experience, could you explain the meaning of the practice of Karate Do?

A: When I was young, I used to be preoccupied with big philosophical meaning. But today, as I have gotten older, I appreciate the benefits inherent in everyday practice, ordinary training, and feeling good. That in a nutshell is the essence of lifetime exercise.

Q: How can karate practitioners increase their understanding of the spiritual aspects of the art?

A: Early on I trained to be strong and to grow stronger. Now, through karate, I have come to understand how to be weak, how to recover from weakness, and how to maintain my level of skill and fitness. I have come to understand and accept my weak side because I understand the importance of modesty and humility. Hard, challenging training helps cultivate modesty and humility, which naturally leads to a better understanding of the spiritual aspects of the martial arts. Therefore, keep training, don’t give up, and don’t become discouraged by your moment of weakness. Instead, learn to value and cherish them for the ultimate spiritual growth that they will bring you.

Q: Is there anything lacking in the way karate is taught today compared with those who were being taught in your early days of training?

A: Life is 90% composed of the ordinary and the mundane. An appreciation for the mundane is what is missing in today’s karate training. For example, when I was a student at Hosei University in Japan, we had no tournaments, just basic dojo training. Our instructor would say, “Today we are going to do Heian shodan 100 times, and we would do it and be satisfied.” Now, students always seem to be chasing the next big event. Often, as a result, the have little patience for the type of ordinary practice and drilling that we did in the early days.

Q: What do you consider to be the most important qualities of a successful Karateka?

A: A commitment to everyday training and an appreciation of the mundane. Train hard, finish, bow and say thank you” for the opportunity to sweat. The most important quality for a practitioner of lifetime karate is the ability to find such satisfaction in ordinary training. Of course, for those students who want to participate in special events and tournaments, I say “Fine”, but don’t neglect basic, ordinary training that makes up 90%+ of the practice of the art. Otherwise, you risk boredom and disenchantment in between those special events, which is quite sad. As an aside, the willingness to pass on your skill and knowledge to others as you grow and develop in your own art is also important. It is said that giving nothing to others is akin to harming them. The successful practitioner of lifetime karate is successful because he has had a satisfying life, not because he is a tournament champion or 10th degree black belt. Satisfaction comes from the ability to enjoy the ordinary and willingness to pass on one’s wisdom as one ages. That’s all.

Q: Sensei, is there anything else you would like to add?

A: As I said earlier, I came to the United States over 40 years ago with a mission to spread Master Funakoshi’s philosophy and teachings. That mission remains a work in progress, and I will never give up, no matter what circumstances may bring. It is my life’s work, my passion, and the raison d’etre for my dojo. I hope that you will make it your mission as well, so that we may ensure that generations of the future continue to benefit from the beauty that is Master Funakoshi’s karate