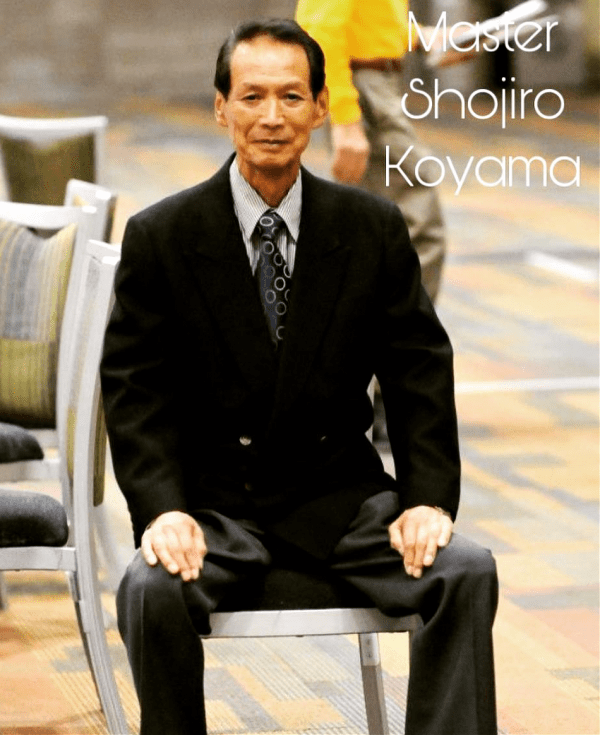 WHAT IS KARATE
By: Shojiro Koyama
Translated by J. Ondrusek

One grandparent of karate originates in the life-or-death environment of the front line of warfare. It was a systematized collection of the defense techniques which had the highest success rates, as determined largely by trial and error. These techniques have since evolved into a means of general self-defense (not just in battle) and subsequently into a sport.

Another karate lineage begins in India, where it shares origins with yoga, with which it still has many similarities. Other martial arts (such as t'ai chi) have been influenced more profoundly by yoga, chiefly because of geographic reasons. The karate prevalent in the world today leans more to the first lineage, but this other side of the family is very interesting and bears examination. It is not my intent to be critical of either side.

Many in this country don't understand or misapprehend the traditional teaching methods employed in karate, including the sometimes military (but not militant) atmosphere. However, this is necessary for authentic karate. Why is this? To explore this, we will venture into the world of neuroanatomy.

As recently as the 1960s, the brain was a black box. There were few clues to its interior workings. In the 1980s, modern techniques such as positron emission tomography, which maps blood flow in the brain, allowed the first glimpses into what structures are involved in actions and thoughts.

The brain is an electrochemical computer, using not only simple electrical transmissions but also chemical transmitters to move and process information. When an electrical signal gap between nerve cells (called a synapse), various chemicals (neurotransmitters) are secreted, jump the gap, and join with receptors on the next cell. The interesting thing about this arrangement is that in various situations, different neurotransmitters (with different properties) are secreted, and the transmitters are influenced by a wide variety of enhancing, inhibiting, and interfering chemicals. Each synapse is really like a complex transistor. Also, nerve cells are not the only ones with receptors capable of receiving neurotransmitters. Such receptors have been found in most organs of the body, including those of the immune system. It has recently been shown that there are specific neurotransmitters associated with particular emotions. These facts support the idea that our emotional state influences our health.

We all know that fear or anger stimulates the "fight or flight" response, in which adrenaline is created. Even though it is made by our own bodies, adrenaline is a very powerful chemical that stimulates receptors all over the body. Adrenaline is so strong, and it is almost like poison (medical doses of epinephrine, the man-mad equivalent, are typically diluted 10,000 times). So it seems like good advice to avoid getting into emotional states that would produce lots of adrenaline. Of course, some of you may be thinking, "Hey, I get mad all the time. If it's so poisonous, why am I still healthy?"

Fortunately, the human body is very well designed. There are specific enzymes that quickly destroy adrenaline to prevent self-overdose; however, if you challenge the control system hard enough or often enough, you can overload it. Without going into the anatomical details, we can simplify things by saying that various parts of the brain are stimulated by adrenaline (and related neurotransmitters) one after the other, beginning with the deeper, more primitive parts and moving out towards the cortex where higher functions occur. The lower levels of the brain have controls to prevent adrenaline overload, but the higher levels do not. It is possible to trip all the circuit breakers and overstimulate the final receptors, which have no control mechanism.

In a way, we can say that sports are devoted to stimulation of the adrenergic system (the system which creates adrenaline and related chemicals), since its main function is the creation of t competition and conflict. The stimulation of this system is not uniformly bad since, without it, we would have little wherewithal to survive, much less create civilization. In fact, in the process of creating adrenaline, we also make dopamine, which is a neurochemical necessary for all kinds of brain functions. But if the system is stimulated to the point of breakdown, one ends up in a competitive state all the time. The saying, after all, is that there is a fine line between genius and insanity.

The other lineage of karate also is represented in the human body. Stimulation of nerve spindle fibers in the muscles, such as by hard exercise, triggers the release of endorphins, which are opiates created by the body itself. The chemicals apparently are part of an internal pain-suppression system, and they can make you feel very good indeed. They work so well that people who take the exogenous (i.e., created outside the body) equivalents, such as heroin, become addicted to them to the point that they will give up on everything to get more. Like adrenaline, this powerful control system keeps the endorphins from getting out of hand.

However, endorphins are also created by a certain part of the frontal area of the cortex. These endorphins do not seem to be limited by a control system, but it isn't easy to stimulate their production. This requires lots of practice and compassion, and similar emotional states.

The saying is that the body is its own cosmos-natural laws provide us with compensatory mechanisms to maintain equilibrium. If you were sufficiently sensitive to the goings-on of the body, you'd never need a doctor - you could tell what was wrong just by "listening."

So, the purpose of modern karate is to make us sensitive - to learn to recognize and comply with our own natural laws. If you only stimulate the adrenergic system through sports, you eventually burn out. If you never fight, on the other hand, you don't make enough dopamine and get sick too. Our tournament helps everyone involved stimulate their adrenergic systems. Our dojo training helps us stimulate our endorphins.

In karate, we try to generate various chemicals and learn to tell which ones do what and which need to be adjusted for long, happy life.